University Institute Of Technology Rajiv Gandhi Proudyogiki Vishwavidyala (UIT RGPV) is one of the top and premier engineering institutions in Central India. The Institution took it's inception in the year 1986, by the Government of Madhya Pradesh. It was initially known as the Government Engineering College (GEC), Bhopal. The UIT-RGPV, Bhopal is a community of teachers, staff, and students, who are dedicated to the achievement of a shared vision of excellence. The community believes in renewing and transferring knowledge & skills and the development of positive & purposeful attitudes and values. As a Constituent College of the State Technological University, the UIT-RGPV is in a position to offer excellent and high-quality academic services to the students.

The institution bears approvals from All India Council for Technical Education (AICTE) and University Grants Commission (UGC). UIT RGPV is situated in Bhopal, the city which is well known for its splendid natural beauty and lakes. Bhopal is well connected to the other parts of the country, by various means of transport such as air, road, and rail. A large number of industries are situated in and around Bhopal, which helps by providing excellent training opportunities to both students and staff.

The sprawling campus of the institution, which spread on a contiguous 241.14 acres assures better facilities and quality education for the students. UIT RGPV Admission offers UG and PG programs in Technology and Science with a number of specializations. The healthy academic atmosphere of the institution has large playgrounds, open space, and academic parks that deliver a better learning experience for the students.

The Highlights of UIT Rajiv Gandhi Proudyogiki Vishwavidyalaya include many features such as Affiliation, Approvals, Infrastructure, etc.  are listed below.

Different UIT departments of UIT follow a state of Art structure and are well equipped with necessary accessories. UIT consists of updated computer centers with a number of computers and there are departmental libraries and Laboratories for teaching Research and Innovations to students. Some of the important labs are

The institution has an All-Weather Approach Road. The portable Water Supply System, supply enough fresh water to the campus. The Electrical generator of the college is very much helpful at times of power failure. The Students' Common Room will be an atmosphere for the students to chat and discuss. The canteen of the institute provides healthy good food and drinks for the students. The digital library is another attracting factor, the computerized library even allows E-Learning. The institute provides hostels for boys and girls and also has quarters for faculty and guest house facility for guests.

Different activities were carried out by the institute under different departments and with the active participation and corporation of students. Activities include Tech fests, Arts fests, sports fests, cultural fests, quiz, etc. Various student activities are opportunities for students to show their skills and calibers. Faculties are very much supportive of the students when it comes to such curricular and extracurricular activities.

Major Companies that visit the campus are Tech System, Persistent System, TCS, Capgemini, Zycus Infotech, AIG, etc. TCS is the main client of the campus, that most of the placements were done for TCS in the previous years

Common Queries regarding UIT are listed below.

1. What is the address of UIT RGVP?

-The address is the University Institute of Technology Narsingharh Bypass Road, Near Gandhi Nagar, Bhopal M.P

2. Which are the courses offered by UIT Bhopal?

-  The courses offered by the institution are UG, PG, and M Sc

3. What is the affiliation status of  UIT Rajiv Gandhi Proudyogiki Vishwavidyala?

-NO, the institution doesn't offer any management course under UIT

Counseling for admission is conducted by the Directorate of Technical Education, Madhya Pradesh state Government through the online off-campus procedure. Seat reservation for the minority categories will be available according to the Government norms.

UIT put forward cut-off criteria for the applicants. Every applicant has to submit a copy of their appropriate eligibility scorecards along with the application. UIT RGPV Cut Off will be strictly focused on the eligibility test score, aggregate score and other academic achievements of the students. The cut-off for each course will be different.

UIT Rajiv Gandhi Proudyogiki Vishwavidyala provides hostel facility for students. Hostels for both boys and girls are available with the required facilities. UIT RGPV Facilities offers quality service in hostels. Rooms are available on a double/ triple sharing basis. Candidates can apply for the hostel facility after completing their admission procedures.

UIT RGPV Cut off Rajive Gandhi Prodygiki Vishwavidyalaya was established in 1958 and granted special status in 1998. The university offers a large number of courses in all fields. The candidates need to qualify JEE Main and MP BE entrance exam to qualify for the admission RGPVT Bhopal announces its cut off and merit list for various courses to get admission in UG and PG program every year. There are around 186 departments and colleges in RGPVT Bhopal for which cut-off will be determined based on the reservation categories and seat availability. The cut-off for RGPVT is determined by various other factors. Below are the given lists of the factors that determine the cut-off. Factors Determining Cut off Number of candidates applying for admissions Number of seats available Marking scheme The difficulty level of the exam Previous year cut off RPVT Bhopal Cut off 2019 Below are the given cut off for the various categories for the year 2019. B.E. in Civil Engineering MP BE Entrance Exam Category Cut off by Rank 2019 General 767158 OBC 1131776 JEE Main Entrance Exam Category Cut off by Rank 2019 General 767158 OBC 1131776 B.E in Mechanical Engineering MP BE Entrance Exam Category...

Placements InUniversity Institute of Technology Rajiv Gandhi Proudyogiki Vishwavidyalaya, [UIT RGPV] Bhopal   Ever since the inception of the Placement Cell, it has created an impression by striking a right balance between academics and industry.It strongly believes in the adage, “Nothing less than the industry best”. The Placement Cell's constant endeavor in preparing it's in the field of technology has been an epitome of success over a period of time. Placements in 2015 Sl.No. Name of Company Date of Campus No. of Selected Students 1 AMDOCS   3 2 Triveni Turbine Ltd. 18th June 2013 1 3 Reliance Industries Ltd. 8th June 2013 5 4 Tata Communication 5th June 2013 1 5 Birla Corporation Ltd. (Unit – Satna Cement) 3rd & 4th June 2013 8 6 GradMener 31st May 2013 3

Infrastructure FacilityUniversity Institute of Technology Rajiv Gandhi Proudyogiki Vishwavidyalaya, [UIT RGPV] Bhopal The institution is situated near Gandhi Nagar on the outskirts of the city, about 3 k.m. from the airport on the Bhopal road.The campus is spread on a contiguous 241.14 acres. The campus has Instructional blocks, Workshop, Library Block and administrative block. Apart from the campus, the University has residential facilities for the staff and separate hostels for both girls and boys. The institution provides a very healthy academic atmosphere and has large open space, playgrounds and academics parks.

ScholarshipsUniversity Institute of Technology Rajiv Gandhi Proudyogiki Vishwavidyalaya, [UIT RGPV], Bhopal BC/BT/ Special Groups Scholarships Physical Handicapped Scholarship Cash Prizes to rank holders Fee Waiver Scheme The State Government has started a fee waiver scheme to help the economically poor but meritorious students. Further information regarding this can be obtained from the Office of the Registrar. Education Loans Getting Education is no longer an insurmountable problem these days. Education loans are available to the needy and deserving students from the Nationalized Banks at reasonable rates of interest. Theses loans are repayable after the completion of the degree/diploma. Financial Help The motto of the University, “Poverty would not be allowed to stand in the way of the completion of the education of meritorious students". Such students are generously helped. Academically intelligent and poor students to acquire higher education by giving them financial help in the form of tuition fee waiver. Relaxation in tuition fee is also given to merit position holders in the qualifying examinations/competitive examinations and position holders in the University examinations. The parents of meritorious students are also honoured along with the students in the annual functions of the Colleges.

Overall Rating (Out of 5)

Based on 11 Verified Reviews

Component Rating (Out of 5)

5 hostels are there. Fes is around INR 3000 per month. Food is okay. You will get outside pg's in reasonable rate in Indra Putri, karond.

Class timings are from 10 am to 5:30 pm with half an hour break. Saturday, Sunday is off. Overall experience is good.

Saloni | Bachelor of Engineering [BE] (Electronics & Communication Engineering), batch of 2020

Hostels are there. They are available for low rent. Labs are not proper with lack of instruments. The infrastructure of college is good but maintenance is required.

There are various official and unofficial clubs. That too of various types like cultural,technical, entrepreneur based and research based is going to open soon.

Aashutosh | Bachelor of Engineering (BE) (Information Technology), batch of 2019

COLLEGE IS GOOD FOR IT AND CS SECTORS. KEY COMPANIES ARE MAINLY FOR IT AND CS BUT EC EX MECH CIVIL ARE ALSO NOT IGNORED, THEY GET PLACED AS WELL. SALARY PACKAGE DEPENDS UPON UR KNOWLEDGE AND SKILLS BUT MIN. INR.3.5-3.6LPA CAN BE DONE HERE. HIGHEST is INR.21 LAKHS FOR 3 YEARS CONTRACTED ONCE HERE. 60% OF IT AND CS STUDENTS GET PLACED 20-30 MECH-AUTO AND EC N 10% OTHERS ARE INCLUDED. STRONG ALUMNI NETWORK IN VARIOUS FIELDS SUCH AS IN UPSC TO DIG POLICE RANKS MANY OF EM STUDIED HERE. THE FIRST INTERNSHIP FAIR OF CENTRAL INDIA WAS IN UIT RGPV PROVIDED A LOT OF INTERNS WITH SOME GREAT OPPORTUNITIES.

31K PER ANNUM... FOR CREAMY LAYERED CANDIDATES. N SCHOLARSHIP ARE ALSO PROVIDED. FEE IS CHEAPER AS COMPARED TO OTHER COLLEGES

Dktiwari | Bachelor of Engineering [BE] (Electronics & Communication Engineering), batch of 2021

The fee is INR 25,000 per annum. The scholarships are also available for the students.

There are many hostels. The hostel fee is INR 400 per month and INR 2100 per month for food. The quality of classroom is very excellent, the lab is digitalised and the central library is very popular on this campus. The dining hall is very good and the infrastructure is very attractive.

All in one & have fun | Bachelor of Technology [B.Tech] (Mechanical Engineering), batch of 2020

I haven’t done any internship yet. Many reputed companies hire our students with an average salary of INR 3 lakhs per annum and the maximum salary offered by them was INR 10 lakhs per annum. 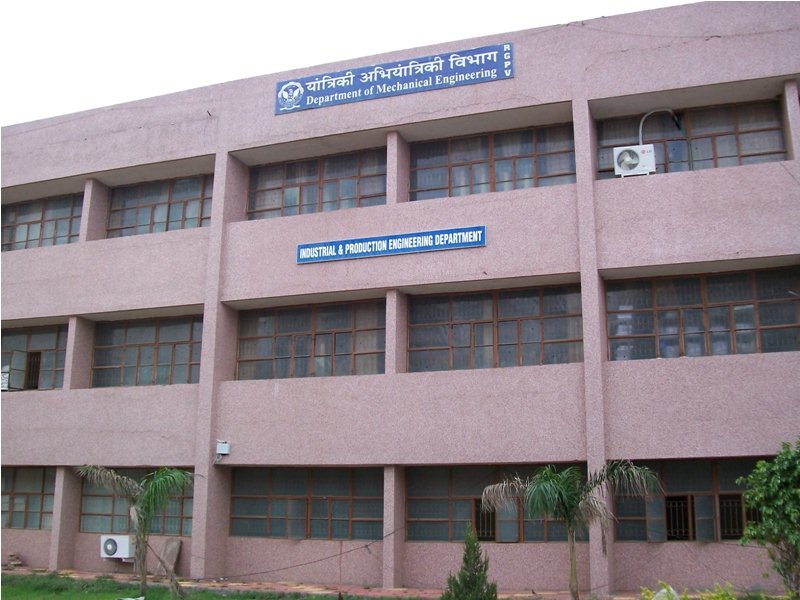 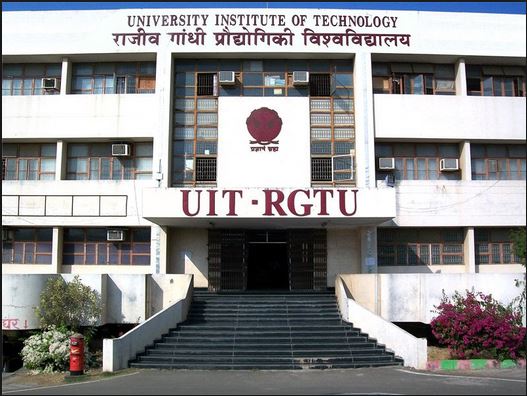