The course fee is very much nominal.

Only government scholarship are available. Average 45% of students get a scholarship. Yes, the loan needed. canara bank

Established in 1959 at the call of Asom Sahitya Sabha in its 27th annual session at Nagaon to perpetuate the memory of Anandaram Dhekial Phookan, the man who had rejuvenated Assamese life and language by bringing in modernism, Anandaram Dhekial Phookan College since then has been doing a yeoman’s service in the sphere of higher education of the state. Facilitating open access to the wider horizon of higher education for the disadvantaged people of the state in general and of undivided Nagaon district in particular the college has lived up to the changing demand and circumstance of the people. Rising up to the expectations and aspirations of the people, the college in its 55 years of existence has transformed itself from a single stream night college to a Day shift college having multiple streams and programmes.

Affiliated to Gauhati University first in 1963 for Arts stream and then in 1979-80 for Science stream on temporary basis, the college acquired permanent affiliation in 1989-90 and 2010 for Arts and Science streams respectively. Recognized by UGC in 1968 the college has now 20 (twenty) departments and a number of skill development and Value Added courses, both UGC sponsored and self-financing. All set to open M.A. course in Assamese from the next session in addition to the existing M.Sc. in Herbal Science & Technology the college plans to start MCA and Integrated B. Ed course as and when necessary permission are received from the affiliating university.

Bagging as many as four state and national level awards by its present faculty members the college had such luminaries like late Abdul Hye, Prof. (Rtd.) Baneswar Saikia, Prof. (Rtd.) R.C. Bora , Dr. N.C. Kalita, Prof.  (Rtd.) S.N. Ojah et al, who have contributed in very many ways for the enrichment of the social, political and cultural life of the state. Vision of the founding fathers while establishing the college has been carried on over these 55 years under the able leadership of successive Principals, both regular and in-charge, like late Sukdev Goswami, late Kandarpa Deb Goswami, late Md. Abdul Hye, Dr. Narayan Ch. Barman, late Narendra Nath Saikia, Prof. Jitendra Nath Bora, Prof. Rabindra Chandra Bora, Prof. Ram Charan Deka, Prof. Sahajananda Ojah, Prof. Nagen Ch. Nath. The present principal is Dr. S.U. Ahmed under whose stewardship the college has progressed a lot, both academically and in co-curricular activities. Students too have brought laurels from national and international meet, making the college proud of its sports talents and giving it satisfaction of successful tapping of hidden talents.

The mission and goals of the college are to disseminate education in Humanities and Science to meet the needs and aspirations of the people of Assam in general and of Nagaon district in particular, irrespective of caste, creed, religion and sex.

To give ample scope in procuring a livelihood after completion of formal education the college has set to introduce vocational subject, both as degree course and certificate courses from 2006-2007.

The cherished vision of the college is to make it a seat of excellence and quality education. 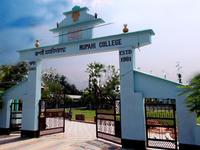