Around 23 students avail the scholarships.

Dravidian University was established in 1997 at the tri- lingual junction, Kuppamin Chittoor District, A. P., 8 k.m away from TamilNadu, 4 km, away from Karnataka and hardly about four hours drive to Kerala, basically to promote a spirit of integration and strong bonds of fraternity among the ma jor Dravidian language speakers of the Southern states and to advance studies and research inthe integrated body of Dravidian lmguico - cultural heritage.

The Dravidian University was established through a Legislature Act of Andhra Pradesh and conceived as an Inter - State Institution. The neighboring Governments of Tamil Nadu, Karnataka and Kerala have extended initial support which enabled the University to take up constructions of Vemana Bhavan, Thiruvalluvar Bhavan, Narayanaguru Bhavan and Basava Bhavan remembering the great Social Saints of the South who enshrined the language cultures with their immortal thoughts.

The University located in a serene rural setting with pleasant greenery spread over the spacious campus of about 1000 acres endowed with huge deposits of granite, giving a picture of rock garden, is one of the most ideally suited institution for quite and dedicated studies and research harmonizing the individual, both internally and externally. The campus absolutely pollution free.

Every growing institution should be potential enough to dream, and Dravidian University also continues to dream to achieve higher goals and to attain a gratifying place of distinction in the galaxy of Indian Universities enjoying international repute.

The global perspectives and research in Dravidian Studies, the contemporary perceptions of higher education and the regional demand of a backward rural area have fused into one mission that led to the formation of Dravidian University, which is different from or Universities in its priorities, obligations and responsibilities. The spirit of integration is the guiding force behind the establishment of the University. The linguistic and cultural integration at national and international levels is the cherished objective of the University

The ultimate goal of the Dravidian University is to foster and strengthen national integration through a wider knowledge and understanding of Dravidian Languages, Literature, Culture, Sciences and Technology. Dravidian University sees the linguistic more as an opportunity for self-discovery and mother-tongue as the Archimedean point to bring about paradigm shift in education. The University promotes a broad-based and extensive project of translation of texts and narratives, in addition to a comparative study of cultures and languages, including visual and performing arts. It endeavors to play a crucial role in affirming the Dravidian cultural heritage and to reinstate the native idioms and in refiguring the local histories. The multicultural focus of the University is meant to respect differences and resist all attempts at homogenization while indigenizing the mind-sets of academics. 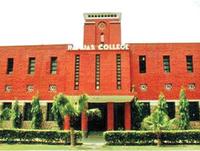 AIMS Institutes, [AIMS] Bangalore Bangalore / Bengaluru   7.6/10
View All Questions & Answers
Are you interested
in this College?