Organizers of the Event

The Ahmedabad center of the nationwide hackathon had ISRO as a premier partner that had identified 35 problems areas for the participants to work on. There were 50 teams consisting of six participants with two mentors each who tackled issues such as developing a solution for document tracking within an organization network, developing a solution for protecting photocopy of highly confidential documents, designing a solution to detect physical intrusion detection, and so on.

What some of the Team Leaders had to Say

We have participated in a number of similar competitions but Hackathon was unique as it posed real-life issues faced by government institutions and provided us a platform to interact with scientists of Isro," said Amit Bardhan, team leader of the team from Shantilal Shah Engineering College, Bhavnagar. “We solved the problem of accidents at unmanned level crossings for the Railway Ministry at NJR Institute of Technology, Udaipur. We came up with the idea and then worked on it for two months. The technology we used in RFID (Radio-frequency identification) sensing wherein a sensor is placed five km away from the barrier on both the sides and the RFID tag is mounted on the top of the trains. When the train is 5-km away from the barrier, the alarm gets activated,” said Ravi Sharma, a student of Vadodara Institute of Engineering who is part of the 8-member winning team.

The students from the winning team met with state education minister Bhupendrasinh Chudasama. 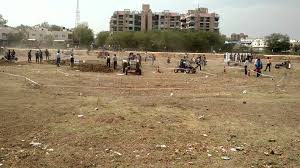