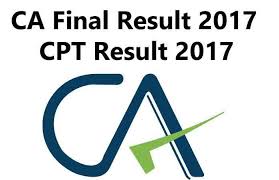 ICAI CA CPT 2017 Results and final CA exam 2017 results are expected to be declared by the Institute of Chartered Accountants of India (ICAI) on 17th January 2018 in the afternoon around 2 pm.

ICAI had organized the Chartered Accountants Final Examination in the month of November 2017 and the Common Proficiency Test (CPT) was organized in December 2017. Candidates who had appeared in these exams must keep a tab on the official websites of ICAI - icaiexam.icai.org, caresults.icai.org, icai.nic.in.

Candidates can get their result via Email by pre-registering a valid personal email address on the official exams website - icaiexams.icai.org. Candidates will receive an email as soon as the results are uploaded by the ICAI. Candidates can also get the result via SMS by sending CACPT(space)6-Digit Roll Number to 58888 from their mobile number.

The next step for the candidates qualifying the CA CPT exam is registering for the second level under the CA course, Integrated Professional Competence Course (IPCC) with ICAI.