For those candidates appearing the XAT 2021 exam will first have to check for the precise exam pattern before attempting it. The expected XAT 2021 Exam analysis and cut-offs can be checked as the exams start off.

Well, depending on the academic experts from the reputed institutions and student difficulty level, performance and exam expectation, the analysis of XAT 2021 exam will be taken into consideration.

XAT is the next big management exam after CAT. The difficulty level of XAT is far higher than that of the CAT exam.

Let us consider the previous year’s data in this article, and can draw an idea to check the XAT 2021 expected cut off and its difficulty level with the examination analysis.

The XAT 2021 Exam will be conducted on January 3, 2021. The appearing candidates can access the response sheet for XAT 2021 by the 1st week of January, followed by the release of answer key by 2nd week of January 2021. You can also attempt free online XAT free mock tests. 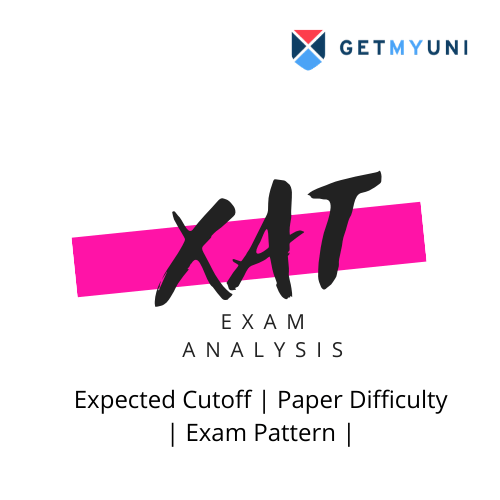 The XAT 2021 Exam was conducted successfully on January 3, 2021. With XAT 2021 being conducted online, the essay type questions were excluded to reduce the duration of the exam to 3 hours. However, a new type of question, the Numerical Answer Type (NAT) was included in this paper. To answer this, the candidates were required to use a virtual keypad on the computer screen to enter the answer.

Take a look at the table displayed below with Sections, Number of questions with difficulty level with time allotment (in minutes) per section.

Laying more emphasis and experiment on the previous year’s XAT exam analysis, the appearing candidates can well-check the analysis tabulated section-wise highlighted below:

The cut-off for the XAT 2021 will be released by the XLRI after the result announcement with respect to the lists of categories accordingly.  Each cut-off mark varies with the different institutes, the XAT results will be announced on February 1, 2021.

Candidates will be eligible for the counselling process based on the percentile achieved on the XAT scorecard with the cut-off set by the different institutes. GD & PI round will be conducted only for qualifying candidates meeting the cut-offs.

Noting that, XAT 2021 cut off variates every year depending on the level of question paper set for the subjects. Most of the reputed Universities like XLRI require the same high cutoffs with few variations with the past years.

You can check out the XAT Cut off marks (section-wise) for the different colleges. With the declaration of the XAT result by February 1, 2021, the associated B-Schools will release their cut-off.

Enlisted below is the various points with changes made in the exam pattern for the upcoming XAT Exam 2021.

Above all the latest changes, it is advisable to always go through the in-depth analysis of XAT 2020 exam analysis or previous year analysis as described in the following, to understand for the upcoming XAT 2021 regarding the exam process, pattern, type and difficulties of the questions levels, expected score with results.

Also, refer to the XAT 2020 Analysis with the answer key to test the level of your preparation with the standard of the XAT 2021 exam test score.

XAT 2020 was held in various Indian cities on January 7, 2020. XAT exam was once again as difficult as the previous years.

While the overall difficulty level of the paper was moderate-tough, the sectional difficulty varies. The VA-LR section was difficult compared to the last year. There were about 6 critical reasoning questions which were of moderate difficulty. The RC passages were short and most of the questions were inference based questions. There were questions based on sentence correction as well.

The DM section had the same level of difficulty as that of the previous year. Questions were based on the following topics. A small detail regarding the question is also been provided in the table below.

The QA-DI section was relatively easier when compared to the previous years. There was one question each from Profit and Loss, Percentages, Timea and Distance etc. But the questions from arithmetic topics were relatively hard. There was a bias towards more number of geometry and probability questions.

General Knowledge questions were based on Static GK as well as Current affairs. The score in the GK section will be taken into consideration only when there is a tie between candidates with the same score.

There was a negative marking of -0.25 for every wrong answer.

The XAT exam in 2019 was also usually tough. To be precise the Verbal section was very tough and the Decision Making (DM) section had some challenging questions.

Apart from the difficulty level, there were certain changes that were implemented in the exam pattern which are mentioned here.

Previously the negative marks for an unattempted question were 0.05 marks.

The total number of questions rose to 97 from 99 as two more questions were added in the Verbal and Logical Reasoning Section.

XAT 2019 had a similar level of difficulty as that of XAT 2018. Students were benefitted with the removal of the essay section.

This was the pattern that was followed in XAT 2019. Every wrong answer attracted a penalty of 0.25 marks.

XAT 2019 verbal section had predominantly RC (Reading Comprehension) passages. There were 4 RC passages with three questions each. Other than that, there were two poems, which were quite difficult to comprehend. CR (Critical Reasoning) questions were also found difficult.

On the other hand, the 2 PJ (Para Jumble) questions were easy. The RC passages were based on Psychology, Art and Social Studies. This section was quite time-consuming.

A potential candidate could have attempted 16-18 questions with 70% accuracy.

This section had the same level of difficulty as that of the previous year. 18 questions were based on situational decision making. There were no Mathematical or calculation based questions which made this section easier. Overall there were 3 caselets and those sets were also similar to that of XAT 2018.

16-17 attempts were considered as good.

Questions in this section were quite difficult compared to that of XAT 2018. Most QA (Quantitative Aptitude) questions were based on Geometry & Algebra. The questions from Geometry was difficult which made the paper challenging.

Arithmetic based questions were considered doable.

There were two DI (Data Interpretation) sets and one of them were tricky while the other was doable. On the whole 16-17 attempts were considered as good.

The difficulty level of General Knowledge section was same as the previous exam. Questions as usually were based on current affairs and static GK. Anyone strong in GK could have attempted 12-14 questions right and scored 7-8 marks.

Overall as per student reviews, XAT 2019 was relatively difficult when compared to XAT 2018.

Every year there are minor changes made in the exam pattern with respect to the previous year. In the same way, XAT 2018 had some changes.

As usual, this section was tough comparatively. Most of the questions were based on RC and CR. The PJ (para jumble) questions and the one and only grammar question was relatively easier.

RC questions were based on Philosophy and Logic. VA and LR was a long and tiring section which almost took 50-55 minutes for a potential aspirant to complete.

This section was also easier when compared to XAT 2018. One of the DI sets was found to be tricky. A total of 19 questions were asked from QA section and most of the questions were based on Geometry and Algebra.

Two caselets based on sports was found on the paper. The two DI sets had 6 questions each.

4-6 questions in DI and around 14 questions in Quant were found doable. On the whole, any potential candidate could have done 17-19 questions in a span of 60-70 minutes.

GK as usually had the same level of difficulty. 25 questions were asked and getting a score of 9 or 10 by attempting 12-14 questions right was considered a good attempt.

The essay topic on XAT 2018 question paper was “Ethical Practices & Sustainability”. As this was a general topic students found it easier.

Are you interested
in this Exam?
Get Free Scholarship